The Herald is informed that the GNPC board, has not met on the issue and has not approved the release of the amount to the individuals mentioned.

The board meeting which was to approve of the payments was boycotted by the Board Chairman, Freddie Blay and Chief Executive Officer (CEO), Dr. K.K Sarpong for no reason.

Interestingly, the memo detailing the approval had said that “At the meeting of the Board of GNPC, held on 25th October 2019, the Board approved the recommendation of the Brand, Communication and CRS Committee for the following requests”.

The memo dated October 29, 2019, was written by the Board Secretary; Matilda Ohene and addressed to the GNPC Chief Executive, Dr. K. K Sarpong.

The revelation thus contradicts claims by the General Manager-in-charge of Sustainability at GNPC, Dr. Kwame Baah Nuarko, who justified the GH¢120, 000.00 to First Lady’s Rebecca Foundation, the US1.8 million dollars for the celebration of Okyenhene’s 20th Anniversary, GH¢50, 000 to the Ghana Journalists Association (GJA), US$30, 000 to Ghana Boxing Association, including a GH¢400,000 towards the preparations of the Damba Festival, are not new as they are in line with GNPC’s vision.

“I can assure you [that], this is not the first time. This is not the first batch of sponsorship requests that have been received this year or have been approved,” Dr. Baah Nuarko told Citi FM’s Umaru Sanda Amadu on Eyewitness News, adding the budgeted donations and sponsorships, were mostly in response to requests made by various interest groups.

But The Herald’s information is that, there has not been an approval of the packages because there was no Board meeting on the said October 25, 2019 date.

It is, therefore, untrue that the board led by Freddie Blay had okayed the release of the cash as said by Dr. Baah Nuarko.

Last week, the Daily Dispatch newspaper in its November 12, 2019 edition also reported that there had not been an approval by the GNPC Board for theGH¢5.42 million payment out of a GH1552 million meant for projects and institutions.

It said “our checks at Fiesta Hotel (where the GNPC mostly hold their Board meetings) showed that only two members of the seven-member Board and the Board Secretary, Ms. Matilda Ohene, showed up. Thus, there was no quorum. For the avoidance of doubt, the Chief Executive Officer (CEO) of the GNPC and Board member was ABSENT”.

Aside Freddie Blay, who is the Board Chairman, others on the board are; Prof. J.S. Nabila, Ogyeahohoo Yaw Gyebi, Kwabena Kwakye, Yaw Kyei, Nana Adjoa Hackman and Dr. Sarpong as members. Ms. Matilda Ohene, who is the Board Secretary, is also the General Manager in-charge of Administration for GNPC.

The Herald had chanced upon a leaked memo from GNPC, showing its Board, has approved some outrageous amounts running into millions of Ghana Cedis, as donation and sponsorship requests for various institutions, including the Rebecca Foundation owned by Mrs. Akufo-Addo.

It was titled “Board Approval for payment of various sponsorship/support requests”, and shows the Rebecca Foundation allocated a colossal GH¢120, 000.00 from the coffers of the GNPC for the stated reason aside donation and sponsorship requests. There are, however, reports that this is not the first time, GNPC is sinking money into Rebecca Foundation. 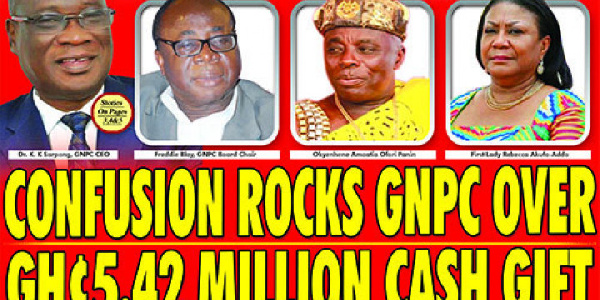 However, the biggest amount is allotted to Okyenhene, for his 20th Anniversary, to mark his ascension to the Ofori-Panin Stool.

On October 4, 1999, the Okyenhene was enstooled as the 35th Chief of Akyem Abuakwa, and state resources are to be used in celebrating that accomplishment.

Osagyefo Amoatia Ofori-Panin, who is a cousin to President Akufo-Addo, is getting a total of GH¢1, 500,000 for the celebrations for over three years period, specifically for “environment and greening”.

The Okyenhene, also gets additional GH¢300, 00.00 to organize the Anniversary, bringing the expenditure to a total of GH¢1, 800,000 just on celebrations.

The Okyenhene’s20th Anniversary celebration, was launched on October 8, at a ceremony at the forecourt of the Palace at Kyebi in the Eastern Region, with the Guest of Honour being Kofi Dzamesi, Minister of Chieftaincy and Religious Affairs, who described the Okyenhene as one of the respectable chiefs, who had brought honour to the chieftaincy institution.

It is not clear, which other state institution aside the GNPC is sponsoring the anniversary.

GNPC is also dishing out a massive GH¢400, 000.00 for the preparation of the 2019 Damba Festival for the people of Dagbon State of the Northern Region. It is not clear, how much the final expenditure will be.

The Ghana Journalists Association (GJA) is getting GH¢50, 000.00 of the GNPC cash, while the Ghana Boxing Association (GBA) is getting US$30,000.00 for no specified reasons aside donation and sponsorship requests as captured by the Memo, which has since gone viral on social media platforms.

The anti-corruption body; Economic and Organized Crime Office (EOCO) is getting a whopping GH¢550, 000.00, also for no stated reason.

It is, however, not clear why EOCO, which is under the Ministry of Justice and Attorney General and allotted budgetary support annually, will be getting donations and sponsorship from GNPC another state institution.

The GNPC, has been lambasted for approving the outrageous donation and sponsorship, but Dr. Kwame Baah Nuarko, said the sponsorships are worth it, and that GNPC, goes through strict processes before requests are approved.

“There is a very clear process at GNPC in determining what should be approved or not…The figures are huge, because the activities involved are huge,” he said.

He explained that the Rebecca Foundation is to receive the funds which will be given to two women’s groups in the Mpohor District of the Western Region for the setting up of an oil palm processing factory, which falls in line with GNPC’s vision of economically empowering people.

He said, some of the sponsorships create an opportunity for the GNPC, to advertise itself and increase the visibility of its brand.