The “Masakyera” actor passed away on Saturday, May 2, at the Greater Accra Regional Hospital (Ridge Hospital) after a short illness.

According to his brother Isaac Darko, Bernard died a natural death, debunking rumours that he had died under strange circumstances.

Shortly after his death, social media was flooded with condolences from Ghanaians and fellow celebrities.

Lil Win, however, took his sympathy to a different level. He shed tears on camera and took to his official YouTube page, Wezzy Empire TV, to publish and monetise (make money from it).

A section of Ghanaians are angry about his action but others want to find out how much is going into the “Ladder” singer’s pocket at the end of the day.

So, I bring you a simple breakdown of how much Lil Win has made so far from the video.

For the record, YouTube uses RPM (Revenue Per 1000 Views/Revenue Per Mile) or CPM (Cost Per Mile/Cost Per Mile) to run ads and pay content creators like Lil Win. In this case, we will use RPM to calculate the amount he has made so far from the video.

The average RPM for content viewed on YouTube in Ghana – mostly the ones I’ve worked on – is around $0.50.

This means an amount of GHC580 is sitting in Lil Win’s Adsense account awaiting cash out.

But in all this, one big question lingers: Is Lil Win monetising his sympathy for the dead worth it? 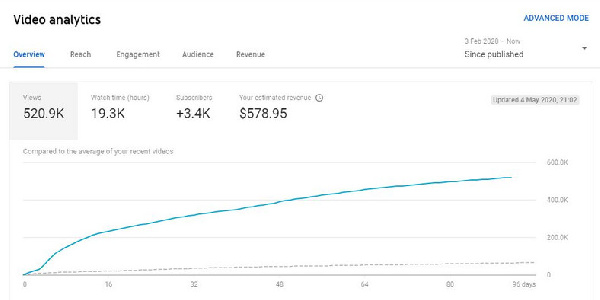 Forum Ghana Registered Nurses and Midwives withdraw strike, say they will not tolerate any form of intimidation from government
wpDiscuz
0
0
Would love your thoughts, please comment.x
()
x
| Reply