Spread the love
It was a wonderful weekend and as usual I was on a stroll in the neighborhood with my primary school mate; Abdul Jalil Gariba, talking about everything from unemployment rate in the country to the state at which people die for no reason in our neighborhood.
We chanced on a lady selling kenkey; not withstanding the fact that she is amazing and beautiful, She has a very wonderful smile. Above all other things, what made me more attracted to her was the fact that she seemed hard working, very tenacious and focused in the selling she does. I must admit, I was smitten. I took her number and left.
Fast forward, we met some few times and spoke for some number of times.
And today I felt I should write something about her. So she has two jobs, she works as a shopkeeper during weekdays and sells kenkey on weekends. In one of our conversations, she made it known to me that she has issues with her weekdays job and she’s in search for another and that she will be grateful if I could help her get another. I was wowed at her. ”Amazing”, I said to myself.
I must admit, I admire women who try as much as they can to be independent and self sufficed. What can I say? That’s what my dad taught me to look for in a woman. A woman does not have to depend on anyone to make it in life. And as such she needs to realize her worth.
Women today result to unscrupulous and dubious means of obtaining wealth. They often engage in whoring just so they will be tagged ‘slay Queens‘ and ‘boss chicks‘ which is very sad and disheartening.
Some of the ladies I know are really trying their very best to make it regardless of their circumstances. They go against all odds to start businesses. I look around and I see a whole lot of businesses owned by women who know what it means to be independent. LAWD Creations is a production house that seeks to be “The best of the seventh art” established by an independent woman. ASALI HAUSA KOKO MIX is also owned by another independent woman.

I would like to share with you my thoughts on who an independent woman is. A strong and independent women is something to behold. She can command the room when she walks in but does not seek the attention for its own sake. She knows what she wants and that she is more than capable of getting it on her own. She is not afraid to express her opinions and beliefs. She isn’t a princess waiting in the tower for someone to save her. She left that tower long ago and saved herself. She has a plan, a mission, a purpose and she will not be diverted or distracted form achieving it. She is powerful because she does things differently. An independent woman isn’t afraid to be decisive. She doesn’t worry that she will hurt someone’s feelings. When she has a problem, she decides what to do about it. She doesn’t wait around for someone to decide for her. She knows what needs to be done and then does it. 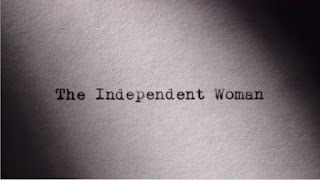 She knows her strengths and weaknesses. She believes in herself and she doesn’t fall into the trap of a negative self-image. She is calm and in control. She doesn’t wait for others to do things for her. She may not know how to do it, but she will find a way to learn how to do it. She doesn’t expect others to solve her problems for her. She doesn’t need someone to tell her it is okay to go do something. She tells herself she can do it. She encourages herself and generates her own enthusiasm. And in that mode, she inspires others to follow her as well. She is too busy getting things done and respects herself too much to need others to hold up her fragile ego.

In the absence of leadership, she leads. She is proactive rather than reactive. She is a born leader. She isn’t afraid to take calculated risks. She isn’t foolhardy. She doesn’t let adversity or struggle define who she is. She doesn’t fall into the trap of negative thinking and blame others for her situation. She isn’t afraid to invest time, money and energy into bettering herself. She understands that in order to help others, she has to help herself first. She is a valuable commodity that appreciates over time.
A beautiful woman is said to delight the eye; a wise woman, the understanding; a pure one, the soul. Time waits for no man, and neither does an independent woman.
I am Rasgony TheAlpha
Advertisements